There are some cultural traditions that make a lot of sense. For example, if you get married in countries like Turkey, the Middle East, parts of Africa, India, Pakistan and Southeast Asia, the bride and groom are given gifts of gold and silver – this can be in the form of coins, watches, mirrors and jewelry, special bowls and cups – but the idea is that the quantity and value of these gifts will signify wealth as well as serve a practical purpose – should the couple be in need of money they can sell some of these items. Depending on the location and the wealth of the family and the community, other practical gifts will be given too, such as blankets, cooking utensils, and livestock.  The newly weds can begin their lives together and survive with these simple things and, if they need to find money in the future, there is a way of obtaining some.  It certainly makes more sense than our cultural equivalent of extravagant wedding lists comprising designer tableware and household goods from a specific store.

It was when I was thinking about the plight of the Syrian and Libyan refugees who must have given up all their wealth to pay for the perilous boat journeys–across the Mediterranean – every cow or goat and every last bit of jewelry would have been sold in the hope and belief they would kiss freedom on the beaches of Europe – that I thought that this could be the answer to my recent dilemma of how to pay for my daughter’s private operation (see ‘Circle of Life’ blog).  I have been divorced now for about 16 years but when I did get married some 28 years ago, I was given a few pieces of gold and silver jewelry by the Turkish relatives of my ex-husband.  Talk about shooting myself in the foot, though, as at the time I let it be known that I preferred wearing silver to gold – if only I had given the significance of the custom more thought – but the couple of gold items I did receive have sat in a box unworn all these years so I feel thankful that I was given them and that they have gone towards the recovery of my precious daughter and her dream. 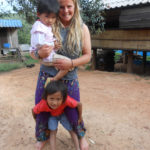 We all hit tough times at some point in our lives and I suppose the biggest lesson to learn is how to cope and how to turn things around if you can.  And it also important that what you regard as a tough time might not be one for someone else – we all have different degrees we can cope with.   When you think of those poor refugees, most of us have rosy lives in comparison and, if you know someone who is suffering in some way at the moment, you will realize how lucky you are.  I feel very fortunate that I have raised two great kids who I am very proud of, and who are travelling the world doing interesting things; I feel so, so lucky that I live in a place of beauty and solitude; and I feel that in spite of the strain of middle age settling itself a little too comfortably around my middle, menopause invading my equilibrium like a steam engine, and a few stiff joints that make me feel like a wooden toy in need of some lubrication around the hinges, I seem to be in passable nick so, in order to continue in that vein, I just have to drum up enough work to keep things afloat. It sounds so simple but it isn’t.

Gone are the days of the understanding bank manager who would listen to my story of giving up work to look after my elderly mother who has dementia – with no social services to speak of there was no choice; instead I have a faceless voice on the end of the phone telling me that if I don’t pay my mortgage the bank will take legal action. It doesn’t seem to matter that I have had accounts with the same bank for 40 years and that I have been paying mortgages and insurances for a big chunk of that time. But, regrettably, in the age we live in the human story is not one to interest the people who pull the strings. 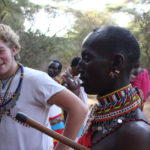 And so I am forcing myself to do things I would normally shy away from – public appearances, public speaking, live cooking, possibly even TV  – but it doesn’t happen overnight, it all takes time to build up and it will take even longer for me to build up my confidence. I am lucky to be surrounded by people who believe in me (Pennie, Phil, Lydie, Kirsten, Tim, to name a few – a big ‘thankyou’) and who gently nudge me to do these things, the most recent being a live cook-off at the Food on Film Festival. Because I am not a natural showman (or showwoman, for that matter), I decided to perform in a similar way to my workshops, going for a bit of audience participation rather than all the focus on me. 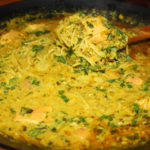 As I was cooking a big vat of Singapore Laksa, it was quite easy to do as there is a lot of pounding with a mortar and pestle and grinding of roasted spices and there is very little room for things to go wrong, other than perhaps to tip the entire Laksa over the floor which, luckily, I managed to avoid. And, as our hobs were electric, I didn’t do the other culinary trick I am famous for – burning my boobs when leaning over the gas flame! So, all in all, it was pretty relaxing and accident free as I gently stirred while members of the audience were able to pound and grind and have a whiff of the aromas as they circulated and I enjoyed some banter with my cook-off competitor, the well-known chef and food Ambasasador, Chris Trotter, who was skillfully preparing 3 dishes to my one!   So, as a number of people asked for it at the Festival, here is the recipe for my laidback Laksa.

I often use chunks of good Scottish salmon in my laksa but you can add any firm-fleshed fish of your choice, or shellfish like scallops and prawns. If you’re vegetarian, the laksa is delicious made with chunks of butternut squash and vegans can just substitute the ghee with coconut oil. The key to a tasty laksa is to make a strong-flavoured rempah (the base spice paste) so don’t be bashful with your quantities of ginger, chillies and lemongrass.

Using a mortar and pestle, pound the soaked chillies, garlic, ginger and lemongrass to form a coarse paste. Add some salt to act as abrasive and keep pounding, then add the macadamia nuts which help to form a thick and creamy paste. Your paste won’t be super smooth and it is nice to have some texture in the laksa so don’t worry if doesn’t seem perfect.

In a small heavy-based pan, dry roast the cumin and coriander seeds until they darken slightly and emit a nutty aroma. Tip them into a spice grinder and grind them into a deliciously aromatic powder.

Heat the ghee in a large wok, or a large heavy-based pot. Stir in the onions, until they begin to soften, and stir in the spice paste. Keep stirring, until the paste emits a lovely aroma, then stir in the jaggery, ground roasted spices and the turmeric. Pour in the coconut milk and stock so that the paste and spices don’t burn and bring the liquid to the boil, stirring gently from time to time. Add the fish and soy sauces – these are optional as they add a bit of salty depth to the laksa but you can just season with enough salt on its own – and stir in half the chopped coriander. Reduce the heat and simmer gently, giving it an occasional stir, for at least 30 minutes to allow the flavours to mingle.

Taste the laksa and adjust the seasoning. If you’re a chilli fan, you can add some finely chopped fresh or dried chilli at this stage. Stir in the noodles and add the chunks of salmon, making sure they are submerged in the liquid for 1-2 minutes – the salmon barely needs to be cooked as it will continue to cook in the heat of the soup in your bowl. Spoon the laksa into bowls, scatter the rest of the chopped coriander over the top, and squeeze a segment of lime over it. Enjoy this delicious, warming bowl of soupy noodles with chop sticks if you can.